Effect of Gun Blast on Surface of Sea

Effect of Gun Blast on Surface of Sea

When the heavy guns of a battleship fire a broadside, the blast churns up the surface of the sea creating a field of whitecaps extending outward from the side of the ship a distance of 100 yards, more than the length of a footfall field. The foamy white disturbance is readily visible in photographs taken of battleships firing broadsides.

Normally a photographer would be waiting with his finger on the shutter release button to take a picture of a battleship firing its guns because of the additional dramatic interest it lends to the overall picture of the ship. At the first glimpse of the flash appearing, he would quickly press down on the camera release button, which would only take about 1/4-second to accomplish. Depending how fast he was, the photographer could capture the flash alone, a combination of flash and smoke, or just the smoke cloud alone.

The effect of the blast on the surface of the sea would last only a few seconds before the surface of the sea returned to its normal state. That would still allow sufficient time to capture the effect in the photograph since the flash itself lasts only a fraction of a second and the smoke cloud is dispersed almost immediately. With a film camera speed of 16 frames per minute, the battle film would certainly reveal that phenomenon in many frames of each section of film.

This is just another piece of evidence to be added to what we already have and which hopefully will contribute to our efforts to seek the truth as to what actually happened during the Battle of the Denmark Strait.

The silence is deafening. Does this mean that you all agree with me that the lack of blast effect of the Bismarck firing her guns on the surface of the water on the port side of the ship is clear cut proof that she must have been firing to starboard. That being the case, the photogrphs must have been printed in reverse.

Sorry Robert - I haven't seen the film, and the only photo I've seen is Bismarck on port side of PoW with Bismarck firing "away" from the viewer i.e. to port. May I have a link to the photo?
Top

Ciao Bob and all,

is this set of 3 salvoes good enough for everybody to realize that Bismarck was firing to PORT side ??

If not just study better the all PG film step by step.

Soon, .. very soon much more on this and hopefully everything in original.

and the overall story with photos.

OK to me Antonio's logic makes the most sense. Setting aside the other points, if the photo's were printed "backwards" wouldn't people have noticed that right away? Surely people who were there would have seen them and pointed out the error.

I do have a question for Antonio about his very detailed track and salvo timing description. It seems that the heavy ships are all firing very slowly. The times have one full salvo per minute, and the Bismarck and Hood surely were both capable of twice that rate of fire. PoW is questionable due to teething problems and green crew.

A possible solution I have is the turns. Did battleships stop firing while in a turn? If that were true, the Bismarck was maneuvering quite a bit and it she fired rapidly while on steady course and then ceased fire during a turn that would explain the low salvo rate and low ammo expenditure. That wouldn't explain Antonio's log, but is it possible you have simply spread out the ammunition use over the given time giving an average of one full salvo per minute?

Bgile wrote:OK to me Antonio's logic makes the most sense. Setting aside the other points, if the photo's were printed "backwards" wouldn't people have noticed that right away? Surely people who were there would have seen them and pointed out the error.

With Schmundt and others breathing down Brinkmann's neck over the fact that Prinz Eugen had no business -- in their view -- steaming ahead of and to port of Bismarck, all he would have had to say is, "Hey, we weren't anywhere near there...these pictures you're looking at are printed backwards !"

Of course, Brinkmann never did...and no one else suggested it either because the facts were obvious to Prinz Eugen's men.

Had any pictures been printed in reverse word would have quickly circulated amongst the Prinz Eugen's officers and men and Schmundt's critique would have fallen apart before it was ever put to paper.

Ciao Steve, Randy and all,

I agree with Randy that have summarized to you an easy an logic consequence to the fact that during post battle scrutiny by Kriegsmarine Senior Officers ( and they did prepare a summary to have Adm Reader ready to respond to Hitler written request's on Op. Rheinubung for June 6th, 1941 at Berghof ) those elements if true would have arised right away.

But they were not even taken in consideration for the obvious reason that were not true and Prinz Eugen Officers knew the facts very well having written detailed reports of the battle as well, consequently the truth was immediately known by KM Senior Officers too.

Of course Prinz Eugen commander was in a delicate position and needed help and coverage during the scrutiny and mostly not to be presented in a '' bad light '' responding to Hitler questions, like been the main responsible of the fact that Bismarck had to turn and disengage from PoW due to his GHG room Torpedo warning ( false and wrong ALARM ).

Hitler was particularly strong on the request of why Bismarck did not sink PoW and I suppose Adm Reader wanted and did save Kpt H. Brinkmann career and probably life as well.

Addittionally the photo are self explanatory as they cannot be reversed due to Bismarck mechanical details that do not allow the mirroring of them, otherwise she will be firing to Greenland and this is clearly impossible.

Moving into the salvoes question, I took the timing and firing sequence in the best way I can from evidences.

British Official reports are saying she fired '' ripple firing '' meaning she was firing the forward and after a while teh aft group of turrets in a '' semi-salvo '' sequence of 4 guns each time.
If you look the PG Rheinubung film that is exactly what you are going to observe and you can count the elapsed time between the 2 semi-salvoes.

I think the main reason for the fire not been at maximum rate was the observation of the fall of shells on the enemy, as that was making adjustemenst very problematic especially when BS and PG both fired at Hood and later when BS and PG both fired at PoW.
Same think applyied to Hood and PoW firing at Bismarck initially as they selected slot of firing not to have to observe fall of shells at same time.
Than you are right, every time you turn you slow the firing, than observe the fall of shells, than adjust and '' quick fire'' a couple of '' semi-salvo '' immediately after you straddle the target, .. and so on.

Last, if you count the shells, percentage of hits than you will realize that PoW did a wonderful job when was firing with no disturb to Bismarck.
Her problems started when Hood was gone and she was alone, than a thunderstorm of shells felt on her and all the problems started of course as within 2-3 only minutes she had to disengage quickly.

On books also this piece of the battle as always been depicted '' the way the British readers would have liked it '' but the reality was different and Churchill went mad about this one.

As you can see, both sides had something to cover, or to tell the way they wanted to the posterity due to immediate needs, .. now Prinz Eugen and PoW roles and responsibilities are much more clear.

Instead of beating around the bush, why don't you guys ever stick to the subject. Where is the blast effect shown on any of the photographs or battle film if the Bismarck was firing to port? Just one photograph please.

It is very dificult to see the effects of the gun blast of ships in the sea surface unless in an aerial view if one is looking from the top, or from the ship bow like this photo =

More, in almost all Bismarck photos the gun blast in the sea is not seen because the sea returned to its normal state already after the guns fired like in this photo = 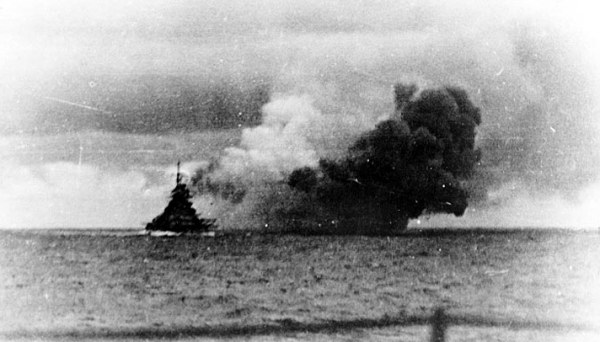 But there is 1 Bismarck photo taken in the very moment of the gun flash that the gun blast of the rear turrets can be seen a bit in the sea surface. It is here 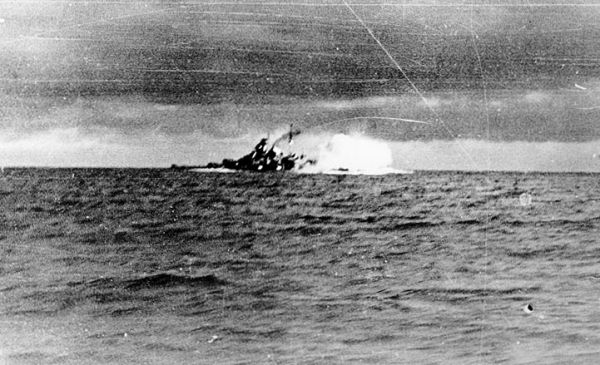 The white color in the rear area of Bismarck is not part of the wake, it is caused by the blast of the big guns.

I hope this helps,

Thanks for your enlightened analysis of the phoographs. I have a glossy print of NH69726, the last picture that you showed, and it is hard to distinguish the blast effect from the brightness of the flash, which often tends to overexpose a larger area of the film than would normally be represented by the size of the flash.

The bright area in the foreground of the Bismarck could be attributed to the reflection of the flash from the surface of the water rather than the blast effect. However, there is a white stripe extending to the right of the fireball which would more likely represent the blast effect because it could not possible be a reflection.

The location of that stripe so near the horizon would put it above the waterline on the near (port) side of the Bismarck, but it would be consistent with the blast effect extending outward from the far (starboard) side of the ship.

What I was looking for was the blast effect on other side views of the Bismarck, such as NH69727, in which the fireball has already transformed into the large cloud of smoke associated with the Bismarck firing her big guns. There would be no ambiguity in such cases since the flash would be gone, but the blast effect would still be visible for a second or more.

Thanks again for your input.