Bismarck off Norwegian coast 21 May 1941

Bismarck off Norwegian coast 21 May 1941

Looking at the current photo on the home page the unusual angle seems to throw up what looks like an optical illusion - that Bruno turret has three barrels, and that the true length of the ship is distorted. Has anyone else noticed this? 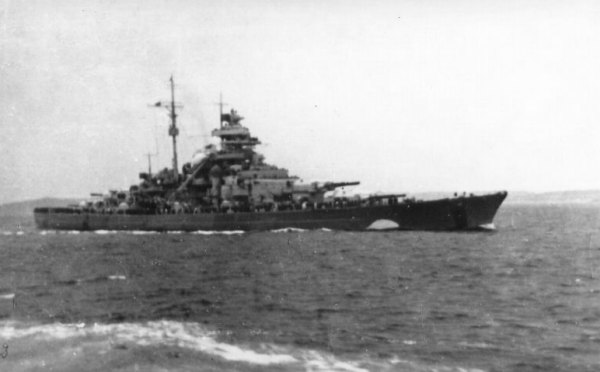 http://www.kbismarck.com/photo035.html
''Give me a Ping and one Ping only'' - Sean Connery.
Top

i must say not really to your question RF, but it does show the hull stripes painted out with only the false bow wave remaining.

Also, the barrels of the 15" look dark gray.
Top

I miss something in this photo. Anyone care to take a guess what that would be..?

...my conclusions could of course be wrong but on the other hand, the photo could have been slightly "adjusted" as well
“Gneisenau has given way, and we are to march at once to your chief.”
Top

Is it the flagstaffs at the bow and stern ?
Top

The bow staff is not the problem. The stern staff however...
“Gneisenau has given way, and we are to march at once to your chief.”
Top

I take it the little black "dot" seen at the top of her main mast would be Lütjens pennant. After all, here is the flaghip. But where on earth have they hidden the Kriegsmarine ensignia? It is not to be seen in her main mast, and shouldn't be there either since she's not in battle right now, and neither to be seen aft by Mullenheim-Rechberg's station, where I suspect the flag could be seen while in transit.

In the background I see something that to me, I'm practically a local to this area, resembles the contours of a rather familiar topography which I take to be Oygarden. That would mean she's passing though the Hjeltefjord on this image, on her way to Fedjeosen and thereafter out to the open sea. She's not off the coast of Norway, she's actually within the coast of Norway. And while passing through this stretch of water, her flag I think should be visible at her stern staff indicating Revierfahrt (a passage through narrow/difficult waters)

But the flag is not to be seen anywhere. Where is it..?
“Gneisenau has given way, and we are to march at once to your chief.”
Top

But where on earth have they hidden the Kriegsmarine ensignia? It is not to be seen in her main mast, and shouldn't be there either since she's not in battle right now

The Reichskriegsflagge is flying from the mainmast at the spreader staff, while the Fleet Commander's is flying from the maintop. Your reference to steaming in narrow waters would be well taken in peacetime, but as Bismarck was sailing in a state of partial readiness for action, even at this point of the voyage, the staff at the stern would have been folded down and stowed away.
Their shoulders held the sky suspended;
They stood and Earth's foundations stay;
What God abandoned these defended;
And saved the sum of things for pay.

Well, there you go. Problem solved. Thanks, Thomas
“Gneisenau has given way, and we are to march at once to your chief.”
Top

The main armament gun barrels bear interest, a subject that has appeared on another website. They appear to still be fitted with the dark, tapered external sleeves she carried in the Baltic. These were fitted with a number of metallic bands, which evidently secured a velocity-measuring pickup coil at the muzzles, and both the barrel "sleeves" and these bands can be seen in some close-up photographs of the guns. The effect of their presence is to make the barrels lose their "stepped" appearance, and a bit larger in diameter than they actually were.

I claim no credit for this, it was information presented by another Bismarck enthusiast elsewhere, as stated above. I am unable to locate either the post or its author, unfortunately. At issue was whether or not these were removed before Rheinübüng; they appear to be in place, in several photos taken of the ship. The original post's purpose was to highlight these barrel "sleeves" as a modeling feature--one that is missing from most kits and scratchbuilds. These gave the guns their "black" appearance visible in the aforementioned photos.

Perhaps the author frequents this site, and can elaborate further--I only mention it because this is yet another photo that suggests their presence, and possibly contributing to the "three-barrelled turret" effect RF described in the title post.

Is it just me, or does anyone notice that the turret tops are significantly lighter in colour than the rest of the ship? It is too light and uniform to be a trick of lighting. I have noticed this in some of the DS battle photos too and thought it was just lighting, but now I'm not so sure. If you look very closely you can also pick up the light colour on the 5.9's and the dome of the funnel searchlight.

I know there has been discussion on whether the turret tops were yellow at any point during Rheinubung. Could this be the colour, or might it be simply a light grey similar to that of Scharnhorst's turret tops in 1943?

The wire leads coiled around the barrels during part of the trials in the Baltic were for measuring probes at the muzzles of the guns. The probes clamped to the muzzles and connected to a cathode ray occilograph. The intent was to measure the time between the pressing of the firing switch and the exit of the shell from the muzzle. This provided data for barrel time of the projectile and its muzzle velocity. The latter was essential in fine tuning the fire control system while barrel time was necessary for ajusting the time interval compensating gear. This was essentially a stabilized firing device which only closed the firing circuit just as the gun muzzle was about to reach the proper elevation in the horizontal plane as the ship rolled, thus insuring the shell left the muzzle at the optimum time for the calculated gun range.

It appears, from the AVKS reports, that the set up was to have been permanent so that accurate data could be collected from shot to shot during rapid fire, but as noted in the report, the clamps used to hold the probes did not stay tight during violent recoil and the system was therefore suitable only for the initial calibration shoots. It was recommended that the gun barrles be drilled and tapped for permanent fittings, but at least as of May 1941 this had only been done to the secondary 15cm battery of Bismarck, but not the main battery. Photographic evidence from the Tirpitz also shows that the recommendations were not implemented on that ship either, at least at the time of her main battery gunner trials.

I suspect what one sees in the photograph of Bismarck in Norwegian waters are the steps to her barrel sleeves--A Tube (or chase), B-Tube, and jacket, together with the very considerable blast bags at the gun ports of the turrets.

Paul, The light colouring of the turrets makes is quite noticeble, however, survivor testimony seems to indicate attempts to paint the turret tops yellow were only made once the ship was making her run for France and that only the flat tops could be adequately painted due to waves and sea spray. Attempts to paint the sloping sides failed due to moisture preventing the paint from adherring.

thomas
Their shoulders held the sky suspended;
They stood and Earth's foundations stay;
What God abandoned these defended;
And saved the sum of things for pay.

surely all of you know well that Bismarck was with Prinz Eugen during Op. Rheinubung.

Here the Prinz Eugen camo schemes, so you can look at the details of her turret top colours evolution during Operation Rheinubung........

.. just as I wrote a year ago,.... showing the Prinz Eugen camo schemes

Interesting discussion ~ the yellow turret tops during the approach to France were always good for heated debates. As to the colour of the turret tops for KM ships in Luftwaffe range around Norway... Wasn't it common practice to have the turret tops painted yellow there?
I was thinking the other day, how (and where) Operation Rheinübung started... in the Baltic, where we know that the turret tops of KM ships were painted either red or dark grey, with or without the sloped sides. So, BS and PG had their turret tops in red or dark grey at the beginning of Rheinübung. On their way to Norway - or as they reached the Norwegian waters, the turret tops COULD have been painted yellow. A short time later, when they left Norway - the turret tops were painted over again? Dark grey?
Then - again a few days later (okay....nobody could know that before...), painting them over in yellow again for reaching Luftwaffe range en route to France?

A hell lot of paint must have been slabbed on those turrets... wouldn't it be easier to strap yellow, red, blue, whatever canvas on top of the turrets? For those short periods of air-recognition such as the transit from the Baltic (red or grey) to Norway (yellow)?

I have seen canvas on turrets but I can't say if those b/w photos show grey canvas over red tops or yellow canvas over grey tops...

I'm currently building a PG model and I wanted to represent him while leaving Norway and I'm torn between dark grey and yellow. Yellow painted on? Yellow canvas?

EDIT: Antonio posted while I was writing...
So, when looking at PG, we should think "Bismarck"...
I still have no idea if grey or yellow, but I believe there was nothing special about the Rheinübung paint scheme. I believe it was just common practice to have the turret tops painted according to the theatre of operation. Why not yellow for Norway? Or dark grey, covered with yellow canvas? Just some food for thought...
Why the Navy? Well,.... I was young and short on money...
http://linerpara.de
Top
Post Reply
41 posts