Lost pictures of Hood in action...?!!

Lost pictures of Hood in action...?!!

Antonio had sent me a link to an interview with PoW survivor Richard Osborne - an Imperial War Museum tape of the same series as the interview with Colin McMullen already posted in the "Articles of War" thread- some 40 years after the fact.

Osborne was a boy seaman stationed in one of the starboard 5.25-inch mounts of PoW...in reel three of his interview he makes (for me) a shocking admission. He was asked about cameras aboard ship and his answer:


...The cameras aboard ships..there were probably quite a lot, but amongst the Boy Seamen cameras were... I only knew of one actually...and he was on the multiple pom poms and during the action with the Bismarck they had a cabin...a shack that they used to shelter in....and he was taking photographs of the Hood. I didn't know this at the time, and when we got to Rosyth, the starboard watch of which both I and he were part, were going on leave before anyone else, before the port watch and he came up to me quite worried. He said he had a film, he'd got photographs of the Hood engaging the Bismarck and blowing up...and he'd got the roll of film and didn't know what to do with it. He wanted to take it home but he couldn't think of a way to get it past the dockyard police.

Well quite wrongly, I took the film off him and got a bar of soap, the issue of soap which was about 8 or 9 inches long, square, cut it in half, hollowed it, wrapped the film up, put the film in, sealed it again and he took the film home in that.

But I don't know what was on the film, but he did say that he had taken photographs of the Hood. I'd no reason to doubt him because he was certainly very worried about it and he wouldn't have gone to the trouble of trying to take it past the dockyard police.

As I listened I literally yelled out!

What....How...Why.....What could those kids have been thinking??? Can you imagine, that somewhere, in someone's attic, gathering dust and mould, could be some of the most incredible photos of the 20th Century?? Absolutely tantalizing!!
Qui invidet minor est - He who envies is the lesser man
Top

I am sure a lot more do exist ... first of all the famous complete version of the Prinz Eugen Rheinubung film ... uncut and uncensored.

Only recently I have realized that even on board the HMS warships there were photo reporter in action ... and a lot has been secreted for sure.

We will see what we can find, ... that is the fun ... and soon the 75th anniversary will arrive a hopefully some material will be released from the secret archives.

This is indeed a mystery that, unfortunately, will be pretty much impossible to solve all these decades after the fact. I have always wondered how come, given that we have that photo of Hood off PoW's port bow, there were no pictures taken from PoW during the action...we now know different!

We can understand, maybe, that the young man was probably frightened to come forward, fearing the consequences, having smuggled the film off the ship...but still he must have at least understood the importance of what he had in his possession...

Ah well...no sense getting all worked up about it!

Well pictures we've not seen before DO exist!

Not in action, but ANOTHER photo showing Hood steaming off Prince of Wales' port bow - probably taken at about the same time as the one we know so well..... And NO, the one we know well is NOT a cropped version of this one. they ARE different.

Found it on this Australian Navy site: http://www.navy.gov.au/history/feature- ... ighty-hood
It tells the story of the 4 Australians lost aboard Hood. the full image may not be showing above - visit the site to see the full image.

Here's the full image. You can see all six of PoW's forward guns. I think the pictures were taken at different times since in the well-known one you see only 3 guns of A-turret all at the same elevation.

This picture, to me, is much more striking than the other...the wide view showing the light shimmering on the horizon, the spray kicking up along PoW's side...

Despite PoW being there, Hood looks so alone...steaming off into the sunset to her destiny... 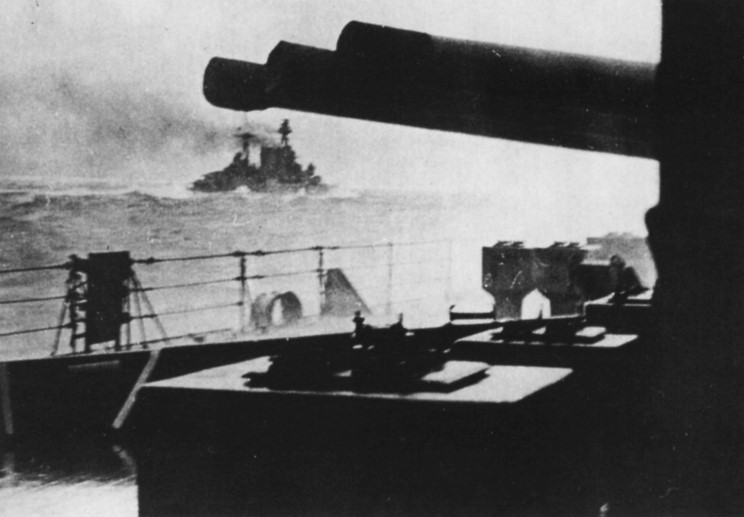 Paul Cadogan wrote: "This picture, to me, is much more striking than the other...the wide view showing the light shimmering on the horizon, the spray kicking up along PoW's side...
Despite PoW being there, Hood looks so alone...steaming off into the sunset to her destiny...
A somber, moody scene indeed....."

It's true, it's difficult to imagine a more sad picture than this one, with HMS Hood sailing at full speed toward the enemy !