This is a still taken from "Die Deutsche Wochenschau" film, dated 11 December 1940.
It shows Admiral Raeder inspecting the crew of the Bismarck in Gotenhafen. Raeder's visit was not recorded on Bismarck's KTB, but it most likely took place during the second half of November 1940. 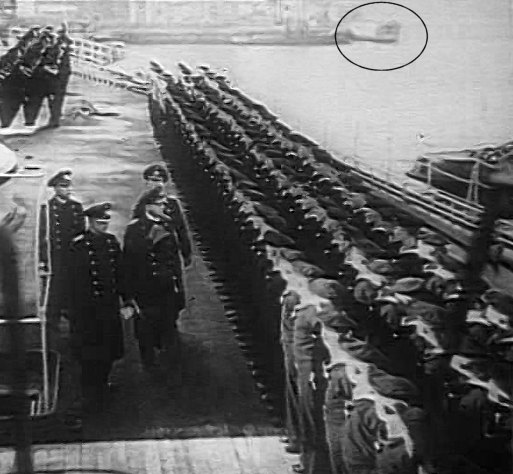 On top of the photo, inside the circle, we can see what it seems to be the transom stern of a "K" Class light cruiser. Since Königsberg and Karlsruhe were sunk during the invasion of Norway, it can only be the Köln. That was the opinion of the late Siegfried Breyer. Can anybody confirm this?
If Bismarck is moored to Seebahnhof, then Köln should be at Hafenbecken IV if I'm seeing the photo correctly.
José M. Rico
Top

More, here you have another confirmation about the places ( Seebahnhof and Hafen Becken IV ) being exactly the ones, due to a building that was at the corner between the 2 piers.

I am 100 % sure that into the film you can see the corner building while on the pic you proposed above you can just see a bottom part of it.

Here a pre-war photo of Konigsberg taken while anchored at Seebahnhof like Bismarck was on that photo you are proposing, and you can clearly see the building I am referring to at the corner between Seebahof and Hafen Becken IV piers.

Hope my explanation is clear enough.

Thank you very much for your reply Antonio, your plan was especially helpful.
OK then, since we agree it is the cruiser Köln moored there, I just checked the ship's KTB and found that Köln was indeed in Gotenhafen at that time. She arrived in Gotenhafen on 16 November from Kiel, and remained there until the 21st when the ship left for Swinemünde. Therefore, Raeder's visit must have taken place between 16-21 November.
I think it could be 19 November since Becken IV is mentioned on the KTB. 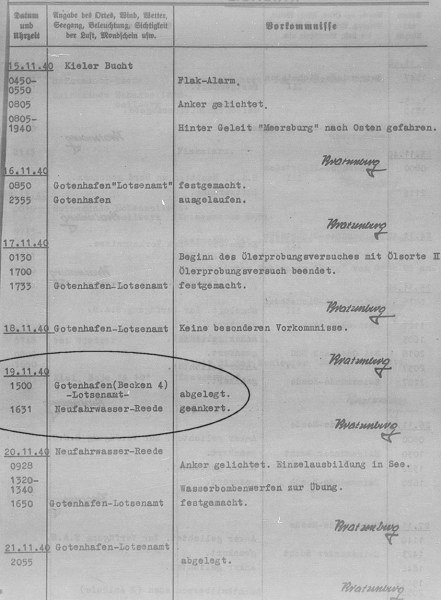 you are on the right way using the Koln KTB, … happy to have helped you about this one.

a gift for you, … now you can see the Bismarck at Seebahnhof, … the building at the corner, … and the Koln at the Hafen Becken IV pier all in one photo from behind in Gotenhafen.

Wow! Great photo, thanks for sharing!

Do you know the exact date it was taken? I have checked Bismarck's KTB again (see scan below), and now I think it can only possibly be 16-18 November when Bismarck was at Seebahnhof. The rest of days the battleship was at sea or anchored in the Bay of Danzig, and when Bismarck moored again to Seebahnhof on 22 November, the Köln had already left Gotenhafen the night before. 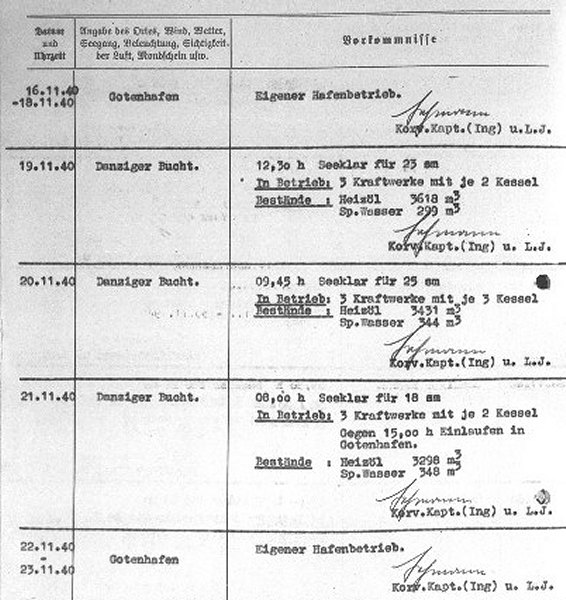 Antonio,
I have just realized that the photo you posted can NOT be from November 1940, since the Bismarck has dark turret tops and the battleflag is hoisted from the mainmast (it should be at the stern flagstaff).
As for the cruiser, it has the bow towards Bismarck, and, I may be wrong but it looks more like Emden.
José M. Rico
Top

you are absolutely right about the fact that it was not a November 1940 photo, ... but a spring 1941 taken one due to the Bismarck camouflage presence, ... but I wanted you to realize the relative positioning of the Seebahnhof and the Hafen Becken IV piers, ... and mostly see the corner building in between them on a single photo.

The ship at Hafen Becken IV is anyhow surely the Koln as you can realize by this comparison with Emden mast and mostly first funnel platforms presence on Koln and absence on Emden.


Here you have a front view of the same situation in color with Lutzow entering the Gotenhafen Harbor to go and anchor after the Koln at Hafen Becken IV too.

The date of this photo is known to be April 12th, 1941, … and by simply looking at both Koln position at Hafen Becken IV as well as the fact that Bismarck main turrets are turned in order to reload the main guns ammunitions, … we should have both photos exact date now, … and it should be April 12th, 1941, …


NOTE : The color photo above has been taken from the book " Anstriche und Tarnanstriche der deutschen Kriegsmarine " at page 38 and 39 ( bild 18, 19 and 20 ), from where I took the date of April 12th, 1941. The authors incorrectly identified the light cruiser been the Nürnberg, but it is obviously wrong, since it is surely the Koln as we all know now, and they should have seen also by the details on the photos ( 3 ) they are proposing ( mast, funnel, camo etc etc ).

Yes, I agree.
Lützow did in fact arrive in Gotenhafen on 11 April (she entered the harbor the next day) and Bismarck was at Seebahnhof between 11-14 April.
José M. Rico
Top

YES, you are correct.

On the Baron book it is highlighted the fact that during those 4 days they re-loaded the ammunitions, ...as we can clearly see on the photos due to the Bismarck main turrets rotation in order to enable that operationto be done.

In order to honor a soldier, we have to tell the truth about what happened over there. The whole, hard, cold truth. And until we do that, we dishonor her and every soldier who died, who gave their life for their country. ( Courage Under Fire )
Top
Post Reply
10 posts • Page 1 of 1