I wonder whether they play a role in order to help de-capping the shell and/or enhancing the jawing movement before hitting the main armored deck, compensating (in some way) the presence of the 12 ER mm deck in between...

I don't know.
Entering a night sea battle is an awesome business.The enveloping darkness, hiding the enemy's.. seems a living thing, malignant and oppressive.Swishing water at the bow and stern mark an inexorable advance toward an unknown destiny.
Top

I confirm, VV fired 7 salvos (19 shells) in 10 minutes at Teulada/Spartivento from her aft turret (Italians were retreating) against Manchester from 28,500 - 32,500 meters, starting her fire at 13:00 in almost perfect visibility conditions.
It's strange Manchester did not realize she was fired at by a battleship... but I cannot comment on VV fire precision as I don't have the original VV GAR of Teulada/Spartivento battle.

I have tried to find something more about Teulada/Spartivento battle, but unfortunately I should go to Rome to find the original Adm.Campioni report and the (hopefully attached) VV GAR to have something more precise...

Anyway, Marc'Antonio Bragadin (former Supermarina officer) in his 1968 "Il dramma delle Marina Italiana" accounts for the battle (listing the Italian Admiralty files as source) saying that Manchester was straddled several times by the Italian heavy cruisers divisions (Adm.Iachino and Adm.Sansonetti) at 12:15 on November 27 1940, while Italians were retreating on course North-West (to Naples) and British cruisers were following them.

Then, at 13:00, Vittorio Veneto (also retreating to North-West), after having diminished her speed in order to support the cruisers, opened fire from extreme range (around 30 km) with good precision and straddled at the 4th salvo out of 7 3-guns salvos in total fired from the aft turret (N.3) only (unfortunately not specifying which British cruiser was straddled at that time...).

Realizing they were fired at by heavy guns, the British cruisers interrupted the chase of the Italians, turned away to South-Est making smoke and the battle was over.

As I see some smoke in the sky in the below photo posted by GiZi (while the visibility was reported as exceptional that day), it is probable that what we see are the British cruisers retreating and it is thus well possible, albeit not sure, that the photo is showing a 15" salvo falling close to Manchester (slightly short and not over, as well as the one against Perth or Orion at Gaudo, but with much much less dispersion than the latter). 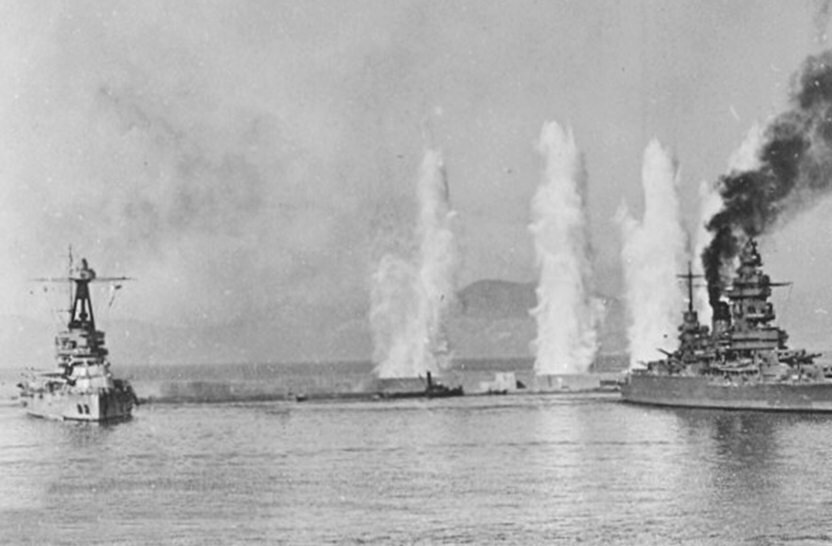 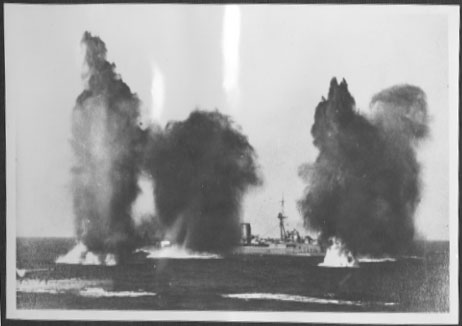