Armistice Agreement Between Germany and France, 22 June 1940
(Translated from the German by Ulrich H. Rudofsky) 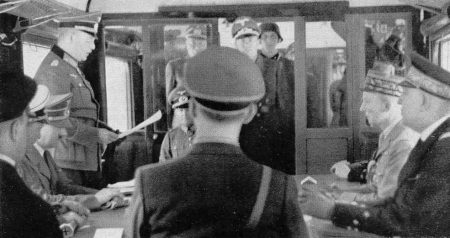 PREAMBLE FOR THE CONDITIONS OF THE ARMISTICE

Generaloberst Keitel, read the following Preamble for the conditions of the armistice:
THE 24 ARTICLES OF THE ARMISTICE

The French government decrees the cessation of fighting against the German Reich in France as well as in the French possessions, colonies, protectorates and mandates as well as on the high seas. It also calls for the immediate laying down of weapons of the French units that are presently encircled by German troops.

For security interests of the German Reich, the French state's territory northerly and westerly of the line indicated on the attached map, will be occupied by German troops. If some of these sectors are not yet under the control of the German troops, this will be executed immediately after the ratification of this agreement.

The German Reich will administer in the occupied sectors of France all laws within its present authority. The French government obligates itself to support the enforcement of ordinances that emanate from these laws and to enforce them with aid of the French administration. Therefore, all French agencies and offices of the occupied territory are to be instructed by the French government to follow the regulations of the German military commandants and to collaborate with them in a correct manner.

It is the intention of the German government to limit the occupation of the west coast to the minimally necessary extent after cessation of the hostilities with England.

The French armed forces on land, at sea, and in the air are to demobilize and disarm within a deadline that will be announced. Exempt from this are such units that are absolutely required for the preservation of civil order. Their strength and armament will be established by Germany, i.e., Italy.

Units of the French armed forces that are now in the territory occupied by Germany, are to be speedily transferred to the territory not intended for occupation and dismissed. These troops are to lay down their arms and equipment before their departure at the location were they are at the time this armistice goes into effect. They are responsible for an orderly surrender to the German army.

As a guaranty for the enforcement of the armistice, the surrender of all such guns, armoured vehicles, warplanes, Flak guns, infantry weapons, towing equipment, and ammunition can be requested from units of the French armed forces, that served in combat against Germany and that are located in areas not occupied by Germany at the time the armistice goes into effect. The extent of the surrender of weapons will be determined by the German armistice commission.

The remaining weapons, ammunition stocks, and war equipment of any kind in the unoccupied area of France are to be stored, i.e., secured under German, that is, Italian control – unless they are permitted equipment that is released to French units. The German High Command reserves the right to any and all measures that may be required, to prevent the unauthorized use of these items. The new production of war equipment in the unoccupied territory must cease immediately.

In the territories to be occupied, all land and coastal fortifications with their weapons, ammunition, equipment, stores, and facilities are to be surrendered undamaged. The plans of these fortifications as well as the plans of those already conquered by the German troops, must be turned over. The accurate descriptions of readied blasting charges, deployed land minefields, timed fuzes, and chemical warfare barriers etc. must be presented to the German High Command. These obstacles are to be removed by French labour, when requested by Germany.

The French combat fleet –except such parts as will be permitted for the preservation of French interests in their colonial empire by the French government- is to be consolidated into certain harbours and demobilized and deactivated under German, that is, Italian control. The basis for determining the harbour shall be the peace-time base of the ship.

The German government solemnly declares that it does not intend to deploy the French warship fleet that is now in ports under German control for war purposes, except vessels that are needed for the coast guard and for minesweeping. Furthermore, the German government declares solemnly and explicitly that it does not intend to raise any demands for the French warship fleet at the conclusion of a peace treaty. Except for such a determined segment of the French fleet that is representing French interests in the colonial empire, all warships that are presently operating outside of France, are to be recalled to France immediately.

The French High Command must provide to the German High Command complete descriptions of all deployed mines as well as other harbour and coastal outpost barriers and defensive and offensive installations.

The minesweeping, when requested by the German High Command, is to be conducted by French labour.

The French government pledges to not engage in any hostile action against the German Reich with the remnant of its authorized armed force or in any other way.

Similarly, the French government will prevent members of the French armed forces to leave the country and that weapons and equipment of any kind, ships, airplanes etc. are taken to England or any other foreign land.

The French government will forbid its citizens take up arms by joining the forces of other states with which the German Reich is engaged in war. French citizens who go against this edict, will be treated as guerrillas by the German troops.

The departure of French merchant ships of any type, including coastal and harbour vessels that are in French hands, is to be forbidden. The permission for the resumption of commercial traffic is under the jurisdiction of the German, i.e., Italian government.

French merchant ships that find themselves outside of French ports, are to be recalled by the French government or, if that is not feasible, given orders to head for neutral ports.

All seized German merchant ships now present in French ports are to be returned unharmed upon request.

An immediate takeoff ban is to be decreed concerning all aircraft on French soil. Any airplane taking off without German permission will be considered as hostile by the Luftwaffe and dealt with accordingly.

The airfields and ground installations of the air force, in the unoccupied territory, will be monitored by the German, i.e., Italian controls. Their disablement may be requested. The French government is obliged to turn over all foreign aircraft found to be present in the unoccupied territory or to prevent them from takeoff. They are to be transferred to the German armed forces.

The French government is obligated to take care that all installations, apparatus, and stocks of the armed forces in the territories to be occupied by German troops, are turned over to the German troops an undamaged condition. It will further take care that the ports, industrial installations and shipyards remain in their present condition and that they are in any way damaged or destroyed. The same applies to all forms of transportation as well as its infrastructure, in particular railroads, roads, and inland waterways, for the entire long-distance communication net as well as the arrangements of aids-to-navigation and coastal lights. In addition, the French government is obligated to perform all the required restorations and repairs by order of the German High Command.

The French government will provide that, in the occupied territory, the required professional personnel, quantities of railroad rolling stock, and other transport means are present and that they are equivalent to the conditions during peacetime.

A transmission prohibition for all telegraph stations on French soil goes into effect immediately. The resumption of radio traffic from the unoccupied part of France requires special control.

The French government is obligated to facilitate and conduct the freight train traffic between the German Reich and Italy via the unoccupied territory in the volume requested by the German government.

The French government is obligated to conduct the repatriation of the population of the occupied territories in cooperation with the appropriate German offices.

The German government will be cognizant of the subsistence requirements for the population of the unoccupied territories.

The French government carries the burden of the costs of maintaining the German occupation troops stationed on their soil.

All German prisoners-of-war and civilian prisoners, including incarcerated and punished captives who were arrested and sentenced for a deed done that was of benefit to the German Reich, are to be unconditionally surrendered to the German troops.

The French government in obligated to return all Germans, who will be requested by name by the German government, living in France as well as the French possessions, colonies, protectorate territories, and mandates.

The French government is obligated to prevent that the German war- and civil captives are deported from France to the French possessions or to other foreign countries. In regard to the already deported captives, who are now outside of France, as well as the transport-capable sick and wounded German prisoner-of-war, an accurate listing of their whereabouts must be submitted without delay. The protection of the sick and wounded German prisoner-of-war is now taken over by the German High Command.

The French members of the armed forces, who are now in German prisoner-of-war captivity will remain in that status until the ratification of a peace treaty.

The French government is responsible for the protection of all objects and assets whose undamaged surrender or readiness can be requested for German use at anytime according to this treaty or it is responsible for the prevention of the absconding to other countries. The French government is obligated to indemnify the replacement value of all destruction, vandalism or deportation that are counter to the spirit of the treaty.

The execution of the armistice treaty is regulated and monitored be a German armistice commission that exercises its activities according to guidelines promulgated by the German High Command.

The armistice treaty is in force until the peace treaty. It can be immediately revoked by the German government with an instant effectiveness, if the French government does not fulfil its accepted obligations of the treaty.

This armistice treaty was signed in the Forest of Compiegne on 22 June 1940, 18:50 hours German summer time.

Article 2 of the armistice treaty mentions the line that begins in the East at the French-Swiss border near Geneva and runs approximately through the towns of Dole, Paray le Monial and Bourges and as far as 20 km easterly of Tours. From here, the line goes to the East at a distance of 20 km along the rail line Tours-Angouleme-Libourne, and continues via Monte de Marsan and Orthez up to the Spanish border.
José M. Rico
Top

Thanks for posting such an interesting document. Needs to be closely studied.
An appeaser is one who feeds a crocodile, hoping it will eat him last.
Sir Winston Churchill
Top

The pre-amble contains a total load of rubbish that would be hard to beat in a party political broadcast.

Still I believe there was a repeat performance two days later, with the armistice signed with the Italians. Now has there ever been another occasion in a conflict where the side that was winning on the battlefield surrendered?
''Give me a Ping and one Ping only'' - Sean Connery.
Top

Who can tell me how Germany made the demand! Isthere any book tell us the decision process,and the details about why there the military demand just like demobiliazation of France force.Thanks
Top

And welcome to the forum.
''Give me a Ping and one Ping only'' - Sean Connery.
Top

I don't think I got the question right, but basically the German demand of French demobilization was not such but that of surrender. And the Germans made it because:

1. The french deserved it since 1870 on.
2. The french were beaten, again, and they got what was coming.

Regards,
An appeaser is one who feeds a crocodile, hoping it will eat him last.
Sir Winston Churchill
Top
Post Reply
6 posts • Page 1 of 1