There are sound reason to be intrigued by the Chinese expertise in shipbuilding and navigation at a time the European simply did not possess these levels of skills until much more recently. Some say that Columbus did not know where he was going, and when he came back, he did not know where he had been. As with most such historical research, the Zheng He voyages and the sparse recorded history surrounding them, there will always be challenges as to the various findings. This is the basis of academic research. All the various hypotheses are very interesting and deserve further study. I have read both sides of the arguments,too. More careful research needs to be done without emotion and opinion getting in the way. I don't think anyone doubts the Chinese of the 12th-15th centuries were prodigious shipbuilders, accomplished navigators and that they were capable of long voyages. Whether Chinese, the Vikings or various Mediterranians came to America first will never be resolved.........
Ulrich
Top

I think the problems with the Chinese claims are mainly two fold:

1. We don't have any evidence so far of their presence in North America, whereas we do for the Vikings and the Europeans.

2. There is no physical evidence of a ship of the size reported. I don't think there is any doubt about the existence of such ships; it's the size that is in question.
Top

I agree 100% with Bgile. About the Chinese reaching America, I think it is pure fantasy from the author of the book. Regarding the size of the ships, it is not that the Eurpeans were behind in construction techinques, the issue is that wood does not support ships larger than what is known. The author speaks too about intenal waterproof bulkheads, ignoring completely the diiculties involved in caulking that.
Top

Actually , Junks were divided up into WT compartments - well , not ones that you could put much of a pressure in , but then in the ordinary junks ( not the extreme , possibly make-believe ones that are the subject of the thread ) being a flat-bottomed and fairly shallow draught design , you wouldnt have to have something totally watertight , just enough so that you could control flooding (hopefully) enough to bale her out , and to prevent free surface effect from rolling her over .

Pretty seaworthy things too . Someone sailed one back here to Falmouth from Hong Kong about 1900 or so , and that Irish navigator who recreates pre-historical ships , Tim Severin , tried to build a junk the old way and sail it on the northern circle sailing route east to the states across the Pacific . The traditional hull treatment was supposed to be stuff called "Tung Oil" inside and out , but there was something wrong there for they only got about halfway and the shipworms had chomped her full of holes , so they had to be lifted off . Shame .

Interesting rig , too , very much less tippy than those bermudan rigged things ( like my small 20 foot toy ) , and dead easy to sail apparently , once you get used to the apparent cats cradle of strings , although I've not had a go .
Bit of a dog going to windward though , but then it is a fat trading hull .
A guy called Blondie Hasler down in the west country used to be a complete fan of the rig about 30/40 years ago for the single-handed Trans-Atlantic annual race , he had a whole series of junk rigged yachts , all called "Jester"

As regards extreme size wooden ships didn't the mad roman emporer , Caligula , waste a boggling sum of money building two whoppers to go on a lake in Italy --Lake Nemo ? or something - anyway, they were supposed to be big enough to have a temple on one and his palace on the other , and when he'd got carved up for his sins , the things were abandoned , sank , and they've recently dug up some of the remains , and found they were not only much bigger than the old rumours and accounts , but also built with a sort of innovative grid of bulkheads inside , like a crate for wine bottles ( yes , that metaphor would occur to you , hammy , wouldn't it !

)
" Relax ! No-one else is going to be fool enough to be sailing about in this fog ."
Top

Interesting that you mention Caligula's barge. One of the "smaller" barges of 200ft was actually found. I am trying to work out plans for an imaginary 1:1250 miniature model for my collection. There are some some interesting renditions of what the barge may have looked like at Google Images: Caligula barge 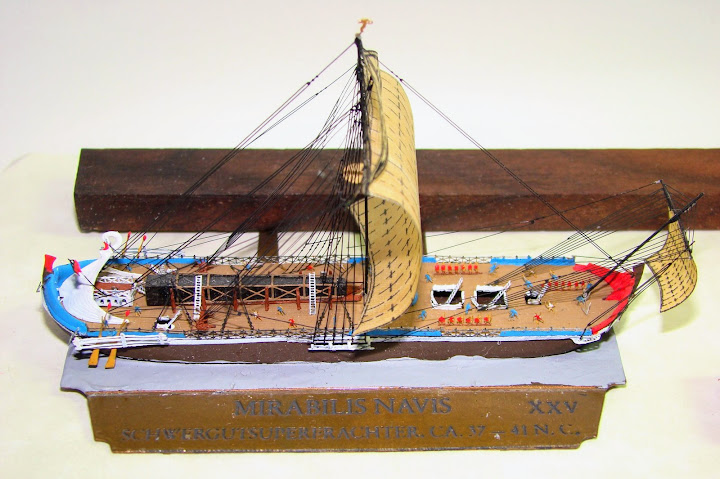 Bgile wrote:...1. We don't have any evidence so far of their presence in North America, whereas we do for the Vikings and the Europeans.
...

I'm not sure about that. I seem to recall reading of at least some possible evidence. Not nearly as conclusive as the Norse evidence but some none the less. There's also much stronger evidence if you are talking about South America.
Top

Hi everyone! Does anybody know a source of plans to build Admiral Zheng He flagship?
Top

As far as I know, there are no plans and all models and so-called replicas are purely imaginary. I used a photo of the model at the Chicago Museum of Science and Industry and a few other sources. One of the sources had a quasi blueprint of the deck outline and side view, but I forgot the link. http://www-news.uchicago.edu/releases/0 ... eng-he.pdf http://www.websters-online-dictionary.o ... Search#906 . The real plans, historical documents and ships were actually destroyed by the emperor who followed after Zheng He’s period. Therefore, you can build a model that fits your imagination. My scale is only 1:1250. The ships were apparently 440 ft long and had 9 masts! 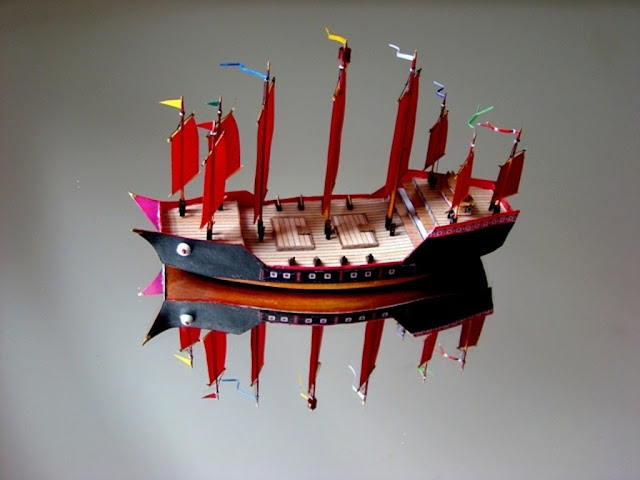 Almost as colourful as a peacocks plumage!

I don't think however the colour scheme would offer very good camouflage.
''Give me a Ping and one Ping only'' - Sean Connery.
Top

If this is all historically correct, then the Chinese didn’t need camo: they ruled the seas at that time

I think one source says that the guns on the treasure ships were used only for ceremonial purposes. Read: to scare the living daylights out of the people they visited.
Ulrich
Top

Thanks for your answer regarding the plans. Should you ever run across that link that had basic hull/profile lines I would greatly appreciate you letting me know by dropping a line to mahoganyships@gmail.com

Marcelo Malara wrote:
"-ships (like the Columbus ships) were short because of the limitations of the technology of the era. With the advent of internal iron reinforcement bands, LOA reached more than 50 mts.

So it is very difficult to believe that a ship that size could be constucted in those years."


You make the false assumption that all areas of the world share the same technology at any given moment of time, when in fact technology - not to mention civilization - can evolve differently in varying areas at radically different rates. The Romans used concrete, but the art of making it was lost (in the Western world) with the fall of their empire, and not re-learned until the 18th century.

Auburn University - https://fp.auburn.edu/heinmic/ConcreteH ... meline.htm - states that "Chinese used cementitious materials to hold bamboo together in their boats and in the Great Wall."

So, there is no way for us to know what the state of shipbuilding technology in China was at that time.
Top

marcelo_malara wrote:Hi guys. Those still believing the crazy theory of the giant ships should read this page http://www.1421exposed.com/.

The only crazy theories appear to be coming from a book by the dis-credited author (assisted by ghost-writers) Gavin Menzies. The seven voyages of the Ming fleet, extending only as far as NE Africa, seem to be fairly well accepted.

On the site you reference above, Dr. Stephen Davies, Museum Director, Hong Kong Maritime Museum writes:
"That the Ming fleets under Zhenghe (Cheng Ho) achieved voyages unprecedented for the epoch, in ships the size and complexity of which were without contemporary parallel seems to me established beyond doubt."
Top

Bgile wrote:I think the problems with the Chinese claims are mainly two fold:

1. We don't have any evidence so far of their presence in North America, whereas we do for the Vikings and the Europeans.

2. There is no physical evidence of a ship of the size reported. I don't think there is any doubt about the existence of such ships; it's the size that is in question.

1. So far as I'm aware, the Chinese never made any claim that they sailed to North America - that was all the provocation of the British writer and his collaborators.

2. We have the very large rudder and anchor shown in the photos earlier in this thread. There are also a number of eye-witness reports from the time that to some extent corroberate the size of the ships. Wiki has an excellent article under Junk (ship) that also addresses the "watertight" compartments.
Top

" . . . and that Irish navigator who recreates pre-historical ships , Tim Severin , tried to build a junk the old way and sail it on the northern circle sailing route east to the states across the Pacific . The traditional hull treatment was supposed to be stuff called "Tung Oil" inside and out , but there was something wrong there for they only got about halfway and the shipworms had chomped her full of holes , so they had to be lifted off . Shame ."

Apparently the problem might have been that they used tung oil, but not the rest of the recipe. From the Wiki article on Junks: "For caulking the Chinese used a mix of ground lime with Tung oil together with chopped hemp from old fishing nets which set hard in 18 hours".
Top
Post Reply
48 posts

Return to “Naval History in General”