This time we go and visit Narvik KM warship anchorages.

Starting as usual with Norway :

Going down with a click on Narvik, than you can zoom in and out to see the OfotFjord with the exit on the open sea, but on north west of Narvik you will find the Bogen bay area. 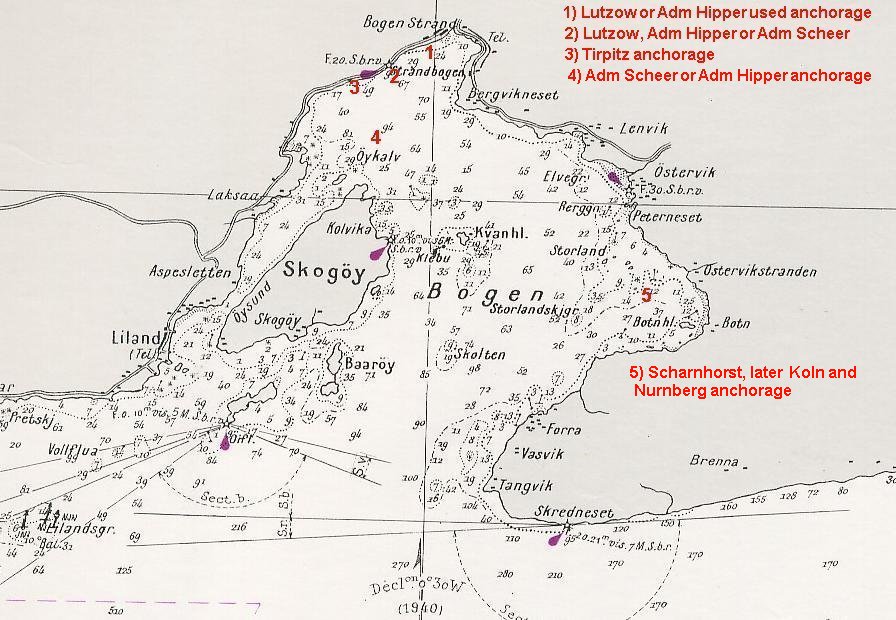 You are really inspiring me to take a holiday in Norway next summer...

here a current photo of the Tirpitz used anchorage in Bogen bay : 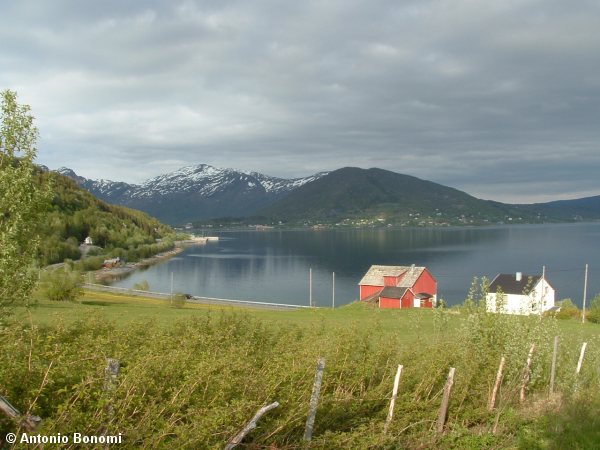 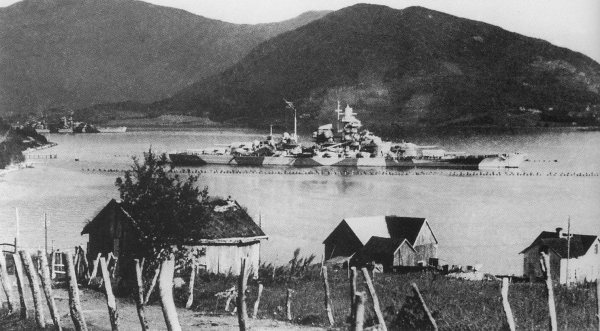 But the real photo is bigger and you can also see the bike of the photo author, which was the brother of a person still living in Bogen that is currently making a model of Tirpitz on scale 1/100. 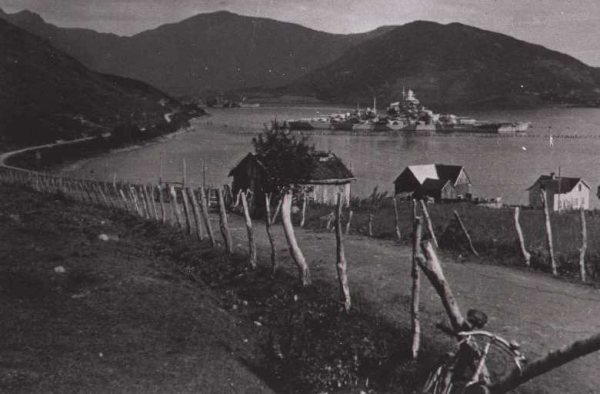 Now a ' trivial quiz ' : I would like you to look for a difference between those Tirpitz photos ( the one above and the one below ) taken on same place and very close one to the other.

Did you notice the difference ?? What is it and why ??

Your photographic collection is excellent.

Time hasn't changed those places at all. I noticed that to the left side behind the Tirpitz there is the pocket battleship Deutschland too. You asked for a difference but other than the photo angle I don't know what it is.

But really all those Tirpitz photos are kind of well known for Tirpitz lovers, my only value add is to have taken a current photo of the place during my trip and have placed them aside, so one can see how the place looks, and with the maps if one wants he can go there too.

Here a link with the guy making the model ( I had a pleasure to meet him in Bogen ) :

I find particularly interesting latest Internet option with maps and satellite views now available, with those it is not necessary anymore to spend a fortune on Naval original maps like I did on the 70's.

No, that ship anchored back to Tirpitz is not a Deutschland class pocket battleship ( renamed Lutzow on 1939 and re-classified as heavy cruiser ).

That is the Admiral Hipper heavy cruiser with the Op. Rosselsprung camouflage scheme.

You can see a model here and check the camo too :

The difference I was referring to is on the Tirpitz, so do not look anywere else around her on the photo, but the ship itself,... it should be easy to be noticed.

Maybe after not so easy to realize ... WHY THAT ??

.. a small but due help,.. since the photos are not so big,.... look at the first Tirpitz one (the one without the bike that is a bit better when enlarged ),.. and of course compare it with the last one,... were the sky is so dark due to the coming thunderstorm,.....

You are right Antonio, the ship in the background is the heavy cruiser Admiral Hipper. Lützow had a similar camo.

I see the difference in the photos now, the big turrets were painted over for air recognition. I wouldn't have figured that out without your help. 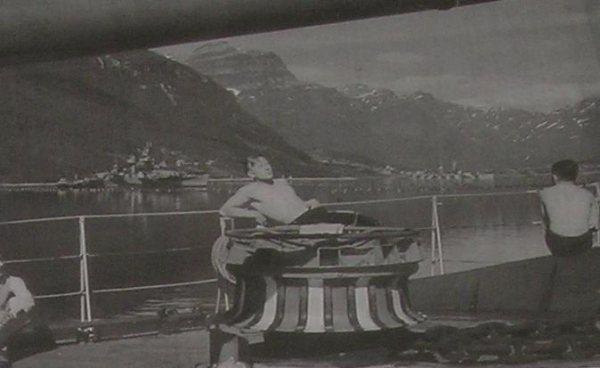 Indeed, the rear part of "Bruno" was already painted with the camo colour...in the first pics "Anton", "Cäsar" and "Dora" seems to be of the usual light grey colour...

But it's strange, in the second pic they seem painted but it's like they are not...may be a light trick from the clouds below?Really dunno...:P

Look at the aft rangefinder, it's turned on the direction from which the pic was taken...funny...

here the way I see it, .. and of course I like your opinion as nobody owns the truth for sure and those ships are everybody object of study of course... they are of the free world.

To me those are 'covers' I mean they are canvas type material, dark and thick used to cover the ' flat ' surfaces of the A-Anton, C-Ceasar and D-Dora top turrets.

Because they are painted with an air recognition colour that the German do not want the RAF recognition to see and realize, as they want to use it on mission so it must be preserved ( they do not want to paint it off and on again on the ship ).

That is why they covered it, .. as the dark stuffs on the turrets is not painture, .. as you can see it is irregular and not perfectly in line with turret plate surfaces.

Now why not on B-Bruno ? .. very simple, .. because there is the 20 mm Flak vierling platform and consequently that turret flat surafce was not painted, so no need to cover it up.


Than I must congratulate Matthias for his good analysis, I never noticed those rangefinders orientation, ...YES, they are turned toward the entrance of the OfotFjord,.. carefully looking at what can come from there, .. the main one is on the opposite direction.

I looked other Tirpitz photos, and other ships too,.. and it seems it was a common practice,... well done,..we all have learned something more,..as you can see those ships will always surprise us,.. it is a never ending learning path,... BRAVO

Anyway, I couldn't be surprised of those Kriegsmarine trick.In effect germans were no new to this kind of camouflages...it was an idea of Rommel in 1941 to build wood structures with cloth panels on the jeeps like Kubelwagen and such veicles to drive the enemy, who were seeing them from afar, to think they were panzer...

But, you know what? I think you guys are forgetting about what happened in the Ofotfjord in April 1940, two years before Tirpitz arrived. The Kriegsmarine lost 10 destroyers there and the Royal Navy another 2, I think.
Top

I remember instead, but Tirpitz wasn't operative yet, during that spring.

Ciao Javier, Matthias and all,

well I have been to Narvik, I saw the wonderful museum dedicated to Narvik invasion during 1940 were those events are very well showed with many remains and evidences, .. I saw some wrecks still there of those German destroyers.

Now we are coming from Narvik,... to the air recognition marking, ..... talking Tirpitz, ... on the Bismarck website were top turrets colours have just been analyzed, ... so Baron Mullenheim-Rechberg, ... the destroyers, .. the Scharnhorst,... Norway invasion, ...again top turrets colours lets see ......

February 1940, Operation Wikinger,.... German lost 2 destroyers on the Helgoland area due to friendly fire ( HE 111 bombs ) they were the Z1 Leeberecht Maas and the Z3 Max Schultz,..probably air bombed because the Luftwaffe airplane did not recognized the 2 ships been German (incident commission conducted on board Adm Hipper), .. so 2 destroyers and the air recognition problem .... starts here.

Operation Weserubung, Norway invasion on April 1940, .. the 10 destroyers sunk in Narvik Fjords, .. among them the Z12 Erich Giese with on board the Baron Von Mullenheim-Rechberg,.... it seems that Royal Navy ships copied the YELLOW colour to avoid been attacked by Luftwaffe airplanes,...immediately KM ordered the colour to be changed in RED for Air recognition,... see my Scharnhorst colour scheme's change on April 1940.

Baron Mullenheim-Rechberg will be transferred to Scharnhorst as artillery officer.

Of course now KM was very carefully evaluating all kind of Air recognition marking improvements,.. so top turrets colours ( see recent Bismarck new releases ), .... their protection from been spotted before been used ( see the Tirpitz canvas trick above ),.. and the utilization of swastika's and red banners to show it better than those were German ships, assuming on the freindly water air ( Luftwaffe ) superiority.

Different story when you sailed OUT of Luftwaffe range,..as than you need to cover ( paint over with grey ) your markings, .. to re-paint them when you were re-approaching Luftwaffe range,.. and properly synchronize KM with Luftwaffe on the correct colour to be air recognized.

I hope my little story will not confuse but help to understand the logic of the events and how they correlate each other on the evolution of what has been probably done thru the story of those ships, .. due to the events and the needs.

Now you should realize better why Bismarck painted the YELLOW turrets approaching France,.. on May 26th morning,...and also how come the British immediately noticed it and used it on their favour to tell the airplanes how to correctly spot Bismarck and avoid to attack with torpedo again the Sheffield,..

Now you realize why,..instead of paint ON and OFF,..on Tirpitz somebody thought that is was better,.. to lay down Flags on the deck when needed instead of paint ON and OFF, .... and to cover the TOP of the turrets painted with canvas when coloured before sailing out in mission,.. and not paint them while sailing ( as they did on September 1941 )... it looks like Italian creativity and not a German way to follow procedures,... maybe that is why I love the Tirpitz,... and like Rommel as one of my favourite subjects too on military strategy ...