Gentlemen,
Could someone explain the difference between semi armour and full armour piercing shells, I realise that they are used for different purposes, but is the difference in the hardness of the nose or just the timing of the fuze?
Top

Okay lets see if this works:

Well it kinda worked. It cut off the HE shell sketch on the far right hand side. These are more or less rough free hand sketches I just made. Anyway, the nose fuse SAP or the third one to the right is basically the same as the HE, which was cut off, but the nose fuse of the HE has a contact trigger right to the nose of the wind screen. The second one to the right is the base fuse SAP. It has no cap. The left hand one is a Armour Piercing Capped or a real armour piercing round. The cap fits over the head of the main body of an armour piercing round and the windscreen fits over the cap.

In the history of armour piercing projectiles the advent of face hardened or Krupp Cemented (KC) armour plate meant that an un -capped shell would be destroyed by the extra hard outer face of the plate. Hence the advent of the cap to prevent this from happening. The cap serves other functions. It first stresses the face of the armour before it is destroyed, thereby aiding the hardened head of the main body to dig into the plate. If the head spalls off bluntly it is more likely to punch through, but if it spalls off more moderately it is more likely to scoop. The cap also shifts the over all center of gravity further toward the head which drastically helps the shell to survive oblique impact. A longer, larger, burster cavity also helps greatly in this regard.

The shape of the head (of the main body-not the cap) has much to do with the armour piercing properties. (actually more important than the weight of the projectile) A sharply pointed head means that it will require less energy to obtain penetration when striking at or near the normal resulting in better penetration performance at or near the normal. However, as the obliqity of impact increases the penetration performance drops off. At acutely oblique striking angles, such as vs deck armour, the penetration of a sharp head shape is poor, and it is highly likely to scoop. A hemispherical shaped head performs better at acutely oblique striking angles and at striking angles not near the normal, but the cap is really easy to knock off such round head shapes. The Germans found that a head shape (not the cap shape) of 0.93 caliber radius gives the same performance at obliuqe impact as a hemispherical head shape, but retains the cap better.
Entering a night sea battle is an awesome business.The enveloping darkness, hiding the enemy's.. seems a living thing, malignant and oppressive.Swishing water at the bow and stern mark an inexorable advance toward an unknown destiny.
Top 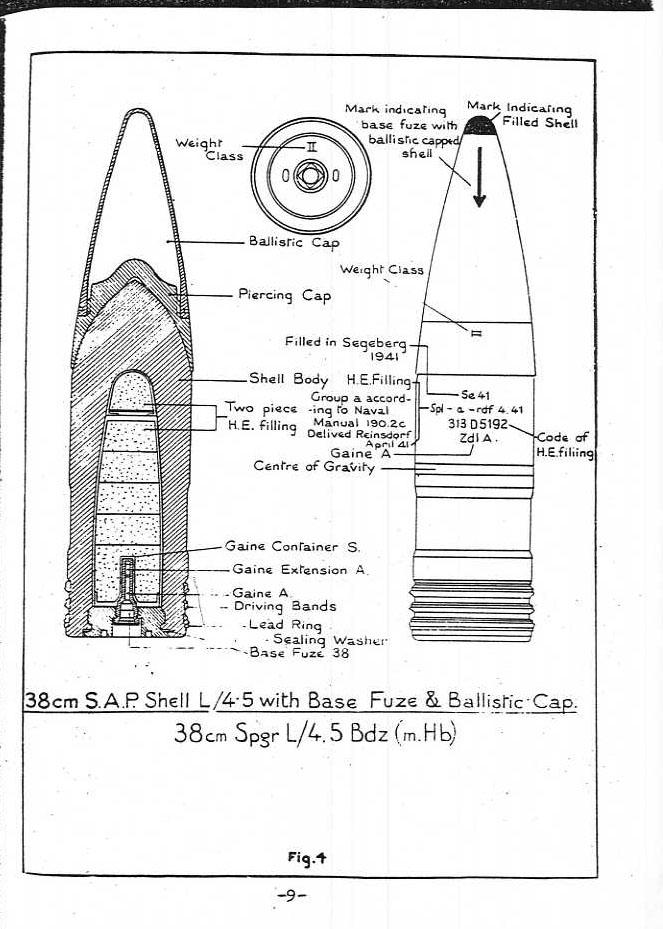 Thank's Thorsten. I wasn't aware of a 38cm SAP with a cap. I based my sketches on the 28cm set of projectiles. In that set the base fused SAP is not capped. It does make sense to have an SAP with a cap option available, nevertheless. Up against a medium armoured opponant using face hardened armour a capped SAP could be handy because it doesn't take exceptionally heavy face hardened armour to cause uncapped projectiles to shatter.

Does any body know the delay times on the various base fuzed German SAP and APC shells?
Entering a night sea battle is an awesome business.The enveloping darkness, hiding the enemy's.. seems a living thing, malignant and oppressive.Swishing water at the bow and stern mark an inexorable advance toward an unknown destiny.
Top

The 38cm base fuzed HE and the 40,6cm base fuzed HE were the only German naval SAP to have piercing caps, if I recall. 28cm SAP on down had only ballistic caps. There a few capped base fuzed HE designs used in former naval guns in coast defence service, but these shells were not used at sea.


Does any body know the delay times on the various base fuzed German SAP and APC shells?

I seem to recall the pyrotechnic delay times in the 38 cm naval Bdz 38 was .035 second. The BdZ 38 eV base fuzes for 20,3cm and 28cm AP and base fuzed HE could be set to 0 delay, .015 second, or .035 second. There were a number of base fuzes used in coastal battery ammunition which were marked KV and these usually had a set .015 delay.

One thing I should add, even when set to 0 delay, there is still a finite time between impact and fuze action in inertial type base fuzes; the time delay figures are for the pyrotechnic element only, as far as I know.
Their shoulders held the sky suspended;
They stood and Earth's foundations stay;
What God abandoned these defended;
And saved the sum of things for pay.

Gentlemen,
Once again thanks for all your inforrmation, I never cease to wonder at the depth of knowledge available from chaps like you on this forum.
Paul
Top

I second that.
''Give me a Ping and one Ping only'' - Sean Connery.
Top

Tommy do you have an drawing of the BdZ 38 eV

im looking for a special feature I know from the base fuze of the 8,8 cm APC-projectile.

as difference from other fuzes the (Skoda) BdZ 5127 was ignited after passing the armor, as difference to mostly other design wich were ignited on impact on the target.

I am afraid I do not have any drawings of the BdZ38 eV, but as much as I can recall from having examined a fuze of that model many years ago, it operated on the same principle as the normal BdZ C/38, aside from a set screw mechanism which directed flame from the flash chamber to one or the other delay pellets or a clear flash channel to the fuze magazine. The fuze had the usual centrifugal shutters locking the inertial striker in place. The shutters were held in the closed position by a circular spring detent which would expand outwards as the shell reached its maximum rpm, thus allowing the shutters to swing out and unlock the inertial striker which carried the fulminate of mercury/potassium chlorate priming capsule. The firing pin was attached to a steel plate which, when the gun was fired set back slightly decreasing the distance between the needle and the inertial striker. Thus, both fuzes were graze action, unlike the BdZ 5127 of which you speak.

The BdZ 5127, of which you speak, worked on a similar principle to certain pre-war USN 'smart fuzes' which were designed to only initiate after a shell had passed through the armour and which had a spring loaded striker needle to give quick operation. I might add, that handling a dud round with the BdZ 5127 is extremely risky, as this fuze is considered to be one of the most dangerous one might come across as the striker, if jammed in the 'cocked' position and with the collar in the armed position, might take only a very slight bump or jar to set it off.
Their shoulders held the sky suspended;
They stood and Earth's foundations stay;
What God abandoned these defended;
And saved the sum of things for pay.

Thorsten is absolutely correct. This is true of all pyrotechnic delays and combustion type time fuzes; there will always be a slight variation in burn times because of barometric pressure, humidity, temperature, etc. This is true of all quoted figures for pyrotechnics regardless of nationality.
Their shoulders held the sky suspended;
They stood and Earth's foundations stay;
What God abandoned these defended;
And saved the sum of things for pay.