Looking at this picture I asked myself how much paint was storaged in the Bismarck and where? Was the paint inside a big tank like the fuel-oil, or buckets were stored inside a room below decks? Any idea? 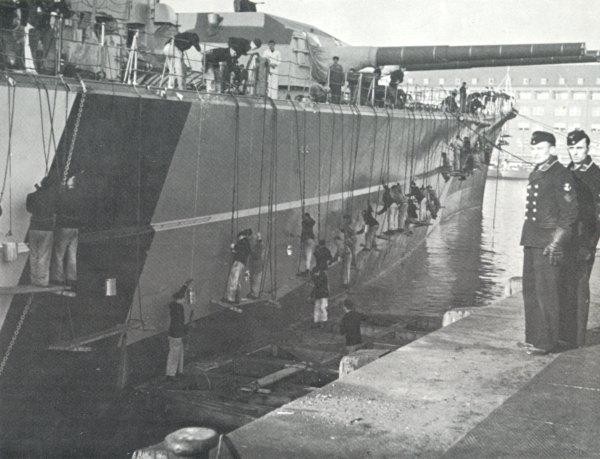 Paint , and the "thinners" to wash the brushes in is a real hazard on all ships , and is usually put as far away as you can get it , which is usually in a " paint locker " room right up in the point of the bows . Before electric power was common at sea there was usually a "Lamp room" away up there too to keep all the flammable parafin/kerosene "lamp oil" as far as possible out of harms way .
The paint was supplied to the ships in big drums , and then poured into paint "Kettles" - a simple tin pot with a wire handle for the painters to use . As your photo shows , painting ship was a highly complicated business , not least because if it came on to rain halfway through , your ship would look a complete mess , and the senior officers professional reputation was in part dependant on smart appearance . As well as the hands detailed to paint , you needed deck parties to raise and lower the planks on which they perched , parties to keep the supply of paint going and dispense material , parties to clean up , Fire pickets due to the quantity of fumes and the possibility these could get drawn into ventilation and air intakes , and seaboats manned and in the water to rescue any "fallen" .

There is actually a case of a British Naval Commander (-- a ships 2 i/c , exec , and the guy responsible for "housekeeping" aboard ) giving the order "Hands paint ship" on a pre-dreadnought battleship actually in action against Turkish forts in the Dardanelles , though in that case it was the upper structure on the unengaged side was what he was intent on decorating .
" Relax ! No-one else is going to be fool enough to be sailing about in this fog ."
Top

IIRC, the paint store for Bismarck is just above the propeller shaft lines, deep within the hull.
Top

We aim to please .

220 t is the weight of the already done paintwork.
The projected weight of paint consumables was 9,530 t.
Regards

Happy painting ~ Olaf!
Why the Navy? Well,.... I was young and short on money...
http://linerpara.de
Top

Ulrich Rudofsky translated the whole weight groups for me time ago. Here is the SIV weight group:

As Marc said, this is the whole weight for the paint already applied everywhere on the ship, including interior.

I suppose 9.53 t would be enough to paint the top of the turrets, hull black/white stripes, and other minor work like they did on the Grimstadfjord on 21 May.
José M. Rico
Top

10.000 tons of paint ! Be a laugh if someone in the Kreigsmarine read the wrong line on the manufacturers list , and ordered " Peach Blossom " by mistake wouldn't it

I think those figures are extrapolations from square metres of area , multiplied by the manufacturers figures for average coverage per litre .

The quantity actually used would vary quite wildly away from those , depending on the conditions under which it was applied ( and also how much of the stock was traveling illicitly elsewhere , lost in the consumption for legitimate uses .

In British service all this loot used to be known as "Willoughby and Dodsons ; - Broad Arrowhead Brand" ( because MoD property here is mostly marked " WD -->"

I've known Land Rovers and Bedford Trucks been smuggled out of the gate before now .

hammy wrote: I've known Land Rovers and Bedford Trucks been smuggled out of the gate before now .

Items that go ''over the wall'' tend to get spotted when it becomes a big fraud.....which is how the little frauds get unstuck when the perpetrators become too greedy.
''Give me a Ping and one Ping only'' - Sean Connery.
Top

Thank you all.
9.53 t of paint makes sense. That would occupy about 10 cubic meters maybe? (don't know the specific gravity of paint

Do you know the paint storage of the Graf Spee? This ship changed colors all the time to disguise the enemy during her Atlantic sortie, so a lot of paint used there too.
Tora! Tora! Tora!
Top
Post Reply
24 posts