Well, it wasn't armor alone - if it had been, there would have been 6 battlecruisers sunk instead of 3 - but armor was the first problem; unsafe ammo handling inside the protected areas was a second...
Top

I believe there was some sort of cover-up or denial of the fact that the dangerous ammo handling was done on orders - the practice making a much larger area vulnerable. I also believe it was penetration of the gun house rather than the side belt in many of the cases (much more exposed) resulting in the flash which then made its way down to the magazines (as was the case with Lion - with the chain reaction prevented by the order to close the magazine doors).

..... I was involved in a very lengthy discussion/debate on the subject of cordite volatility some months ago over on the Battleship versus Battleship Forum. In short, my argument ran as follows - cordite was an early first generation modern propellant and there was no prior service experience to fall upon. Pre-war testing was incomplete, leading to the belief that cordite was a benign propellant that would burn if ignited outside the gun breech but not "explode" or deflagrate. The RN doctrine of maintaining quantities of "ready use" ammunition at the guns was clearly admitted in the official documentation to be a calculated risk, accepting the possibility of "ammunition fires" in exchange for promotion of a more rapid fire. The general impression within the fleet at that time was that cordite was MUCH safer than the old black powder propellant; violent deflagration, such as occurred at Jutland, was not thought to be possible. Later events revealed that cordite was an immensely more volatile and faster burning propellant than German RP/C12 and was indeed dangerously prone to violent deflagration when set alight - particularly so when in large quantities within confined spaces.

Lax handling practices and inadequate flash protection certainly played a role, as did poor quality control in the mass production manufacturing process, but IMO the essence ofthe issue was the dangerous nature of the propellant itself.

The real motives behind Jellicoe's suppression of the issue after Jutland are difficult to ascertain with any certainty, but several quite sensible reasons do suggest themselves.

dunmunro wrote:The range between DoY and Scharnhorst opened mainly because the two ships were steaming diverging courses, as you can see on the official track chart: 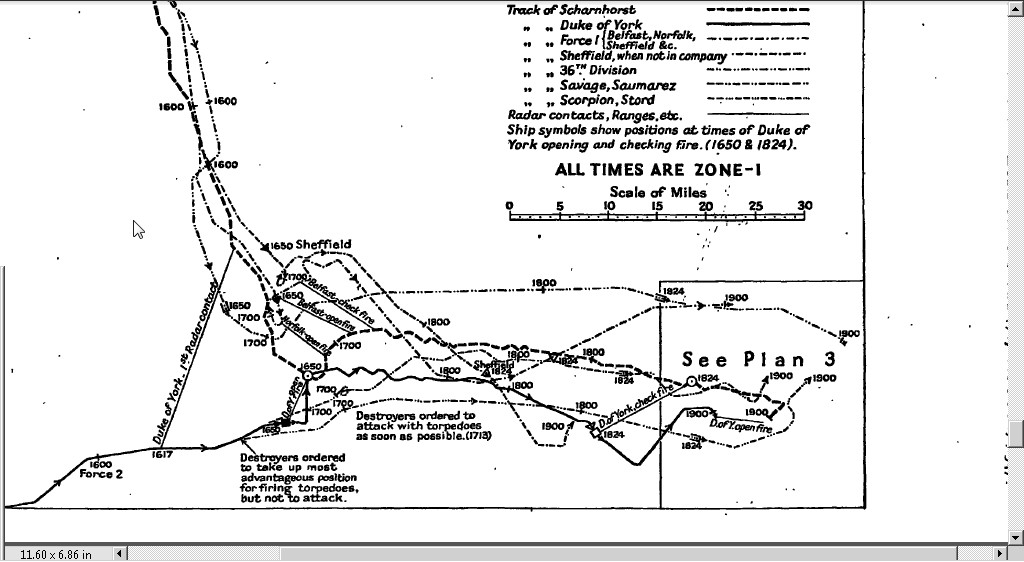 Kemp in Convoy, p180 also provides verbatim Scharnhorst's radio signal at 1819: "Opponent is firing by radar location at more than 18,000 yds. My position AC4965 [79d09'N28d30'E]Course 110deg, speed 26 knots." This supports my contention that DoY was making 24 knots for most of the action. At 1840, Fraser signalled that his speed was 27 knots, and this is supported by the chart, and I suspect that DoY was able to increase her speed after she ceased fire, because she could turn her forward turrets away from the bow.
Top
Post Reply
79 posts