I looked at the TOSA test results (position and size of holes in the hull, etc.) and the Japanese diagrams of underwater trajectories and, interestingly enough, the hit seems to have been a PERFECT example of a tumbling pointed shell, in that it made a hole in the hull in the form of a slot from a SIDEWAYS impact. Thus, all of the design effort on the Japanese Type 88 and later Type 91 AP shells, with their break-away noses, lack of improvement in armor penetration ability over their immediate post-WWI British "Greenboy" design basis (British 13.5" and 15" Mark 5 APC shells of circa 1921-24), and super-long fuze delays, was based on a projectile with a DEFECTIVE FUZE, since the projectile did not detonate after moving a rather long distance through the water, but did detonate after punching through several plates, one of which was the heavier anti-torpedo bulkhead between the torpedo defense system and the hull spaces proper. If you look at the position of the explosion inside the ship, near the centerline, this corrolates with normal fuze delay action after punching through that anti-torpedo bulkhead set the fuze off. Thus, it is ironic that such a major effort was based on this cause, with so little so show for it during WWII.

First, thank you for coming here and posting.

Doesn't a heavier shell (thicker walls and nose) also have a better chance of remaining intact after penetration?
Top

......and (if I may interject on Bgile's question) of exploding correctly?
''Give me a Ping and one Ping only'' - Sean Connery.
Top

found a british document on diving shells
There is also a interesting statment about the armor of Tirpitz but its also possible to be fictional.
Seems to me, even they know the real thicknesses of whether deck and armored deck, they assume a thickness of horizontal protection equivalent to 6 inches RHA beeing immune up to 30kyards. 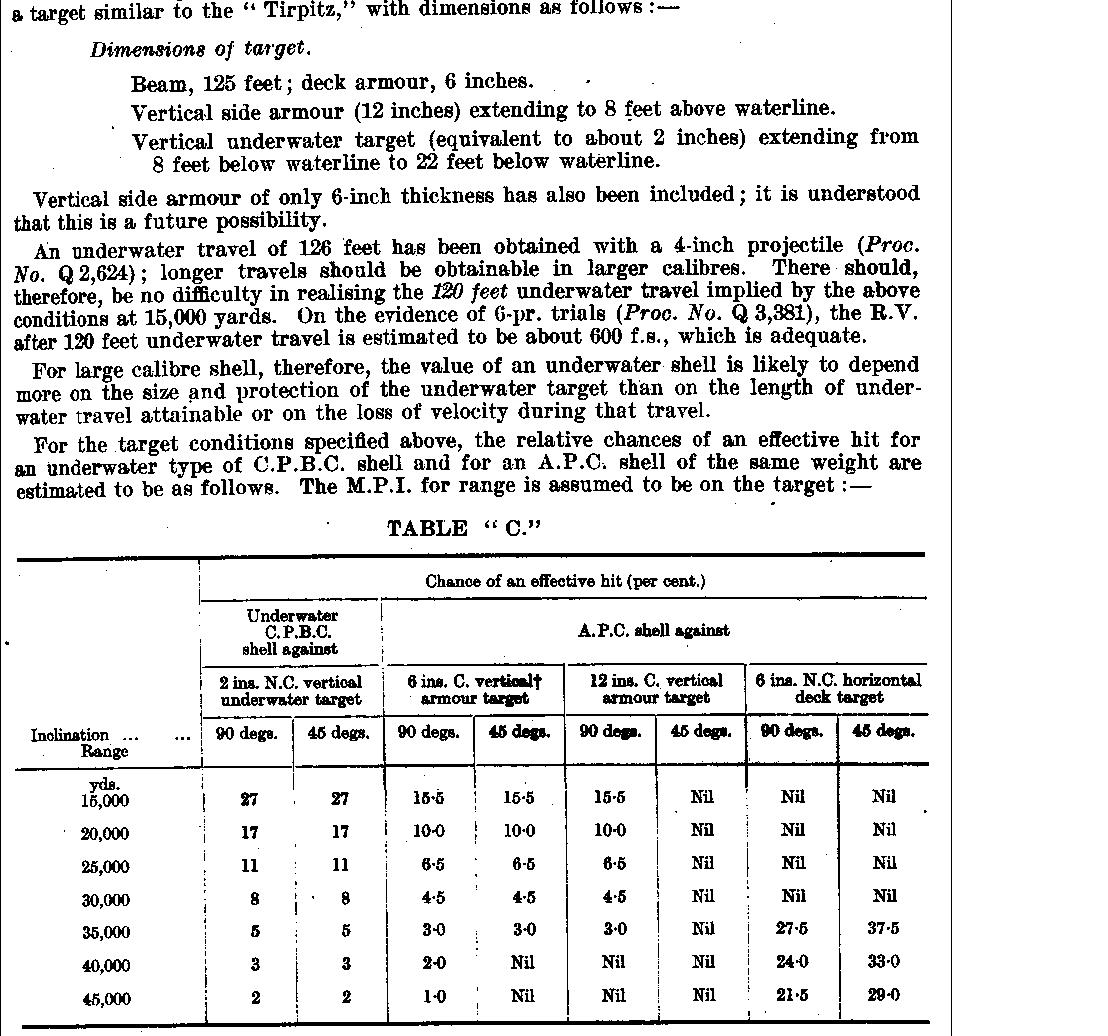 By "underwater travel" they mean that the shell can travel that far, if suitably fuzed. Normal fuzing would prevent such long distances.
Top

i also thing that were not used for such long distances. and the presentation of the document is a real proof

The navweaps articles were known to most of the recent forum members.

It would be interesting to learn from you, on what distance you expect a perforation of Bismarcks armour scheme. What is the basis of your opinion?
Meine Herren, es kann ein siebenjähriger, es kann ein dreißigjähriger Krieg werden – und wehe dem, der zuerst die Lunte in das Pulverfaß schleudert!
Top
Post Reply
23 posts